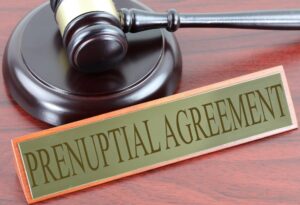 Prenuptial Agreement Australia (otherwise known as Binding Financial Agreements “BFA”’s) can be drawn up prior to, during or after a relationship/marriage. BFA’s set out how all or any assets or liabilities will be divided in the event of a breakdown of your relationship.

This means that the assets and liabilities in the parties’ possession at the time of entering into the agreement can be accounted for and so can any accumulated during the relationship. This also includes Superannuation.

Prenuptial Agreement Australia and more information relating to Pre Nups & Binding Financial Agreements in Brisbane can be found on our blog.

Spousal maintenance may also be considered in a BFA.

If you are contemplating marriage or entering into a de facto relationship it is a good idea to have a competent lawyer advise you on the pros and cons of doing so. It may be in your best interests not to enter into a BFA under certain circumstances.

People enter into BFA’s after a relationship to account for special terms that the Family Court may not make whilst apply for Consent Orders. In this instance BFA’s provide future security and certainty so that you can make special arrangements that the Court may not make for a number of reasons. This may be for reasons as simple as they may feel that such a decision would prevent the matter from returning to the Court to such reasons as the Court not believing such a division is fair.

BFA’s / Financial Agreements under the Family Law legislation are not simple agreements. Speak with experienced brisbane family lawyers at your earliest convenience.

Some helpful advice if you are considering entering into a Binding Financial Agreements.

We will often have clients come and talk to us about BFA’s. Many have done some research on the internet and have formed the view that they are not worth the paper they are written on.  If they are done properly they will hold up to any scrutiny and will remain as binding as a Court Order.  If the right steps and proper drafting are not done then a Court may have no issue in setting the BFA aside and then your property will be dealt with according to Australian Family Law.

Solicitors are required to advise the parties entering into a Financial Agreement on the advantages and disadvantages of entering into Binding Financial Agreements. The advice will need to be written and this is referred to as Independent Legal Advice. This means the parties can sign a certificate attached to the agreement that they have received this independent legal advice. The solicitors also sign certificates stating that they provided the advice required prior to the parties signing the agreement.

Helpful Hint: You will very likely find a lawyer who will witness your signature on an agreement you or someone else has drafted and tell you what the Prenuptial Agreement Australia means.  They will then sign the certificate stating that they have given you independent legal advice.  They may do this for only a few hundred dollars.  If you have not received full written advice as set out on this page it will fall over if challenged.  Then it will not be worth the paper it is written on.

BFA’s are drafted according to the section your circumstances fall under the Family Law Act 1975.  You will need to have the agreement drafted pursuant to different sections depending on whether you are in, intending to enter, or are ending a de facto relationship or marriage.  The same weight is attributed to both relationships under the Family Law Act 1975 and this is the same for same-sex couples.

To obtain the required written independent legal advice first detailed instructions of the relationship must be obtained by the solicitor.  This includes:

It is then necessary to obtain detailed instructions in regard to the wishes of the parties in regard to assets they wish to maintain full and legal control over and those assets which are to be joint assets. Instructions are also required in regard to superannuation, estate rights, and spousal maintenance should the relationship break down or if there is a death of one of the parties.

It is necessary for both parties to provide of t their present assets, liabilities, and other financial resources including superannuation. The schedules are required to be attached to the Financial Agreement.  If agreement

All of these factors will need to be considered and steps are taken to provide the required full independent legal advice and draft the agreement.

It must be remembered that both parties to the agreement need receive this detailed advice from separate solicitors.

Unless all these steps are carried out and proper advice given there is a strong possibility that the agreement would be overturned by the Family Court if a party upon separation wishes to set aside the agreement and seek a greater property settlement than that set out in the agreement itself.

Once drafted and properly executed one party retains the original agreement and a true copy given to the other party.  It is also important that the financial agreement documents are stored in a safe place.  The agreement will not come into effect until a point in time in the future when a separation occurs.  This may not be for a considerable time, therefore, there is an obligation on the parties to maintain the financial agreement documents until such time it will need to become relied upon.

Note: It is necessary that the other party obtains advice from a competent family lawyer and receives detailed advice in writing. There are many cases where the agreements have been set aside when the partner has not obtained that detailed advice.

WHAT ARE THE ADVANTAGES OF ENTERING INTO A PRE-NUPTIAL, POST-NUP, OR BINDING FINANCIAL AGREEMENT?

This means it is a good idea to consider spousal maintenance provisions in the agreement.

It is advisable to define clearly the spousal maintenance to be paid should a separation occur.

The parties should be aware of the provisions of section 90F of the Family Law Act 1975 and the other provisions in the case of a de facto relationship.

Careful consideration must be given to the drafting of terms in regard to superannuation due to the sum of superannuation a party has at the time of the agreement coming into effect will only be known at that time or the time of death.

The drafting of such terms in the financial agreement must satisfy the requirements of the trustee of the particular fund as it would in Orders of the court.  This is to provide procedural fairness to the superannuation fund.

There may be other superannuation funds that a party enters into in subsequent years.  For the benefits in a superannuation fund (or any entered into after the drafting of the financial agreement) to be paid to the other party upon separation,  the provisions must be specifically set out in the financial agreement so that the trustee of the fund is given procedural fairness to approve the provisions set out in the agreement.

When an agreement is limited to specific assets the other assets falling outside of the agreement will be dealt with under the general provisions of the Family Law Act 1975 and in relation to the law applicable at the time of the separation.

What are the disadvantages of having a Binding Financial Agreement?

Disadvantages of entering into a financial agreement:

In regard to child maintenance or child support terms in a Binding Financial Agreement, terms can be inserted but such terms must meet the requirements of the Child Support (Assessment) Act.

The Family Law Act 1975 sets out that a financial agreement will “end” under two circumstances.  It can be either “terminated” under s90J or 90UL or “set aside” under s90K or 90UM.  Termination is an action of the parties agree to undertake, however setting aside is an action of the Court.

Setting aside a Binding Financial Agreement

A Court may set aside an agreement if it is “void, voidable or unenforceable”.  If this ground is used, the parties or one of them may already consider that the agreement no longer operates.  A party may apply to the court for an order that a financial agreement be set aside in circumstances where that party already believes that the contract has been rescinded, breached or is otherwise unenforceable.

if, and only if, the court is satisfied that:

(i)  for the purpose, or for purposes that included the purpose, of defrauding or defeating a creditor or creditors of the party; or

(ii)  with reckless disregard of the interests of a creditor or creditors of the party; or

(i)  for the purpose, or for purposes that included the purpose, of defrauding another person who is a party to a de facto relationship with a spouse party; or

(iii)  with reckless disregard of those interests of that other person; or

(b)  the agreement is void, voidable or unenforceable; or

(d)  since the making of the agreement, a material change in circumstances has occurred (being circumstances relating to the care, welfare and development of a child of the marriage) and, as a result of the change, the child or, if the applicant has caring responsibility for the child (as defined in subsection (2)), a party to the agreement will suffer hardship if the court does not set the agreement aside; or

(e)  in respect of the making of a financial agreement–a party to the agreement engaged in conduct that was, in all the circumstances, unconscionable; or

(f)  a payment flag is operating under Part VIIIB on a superannuation interest covered by the agreement and there is no reasonable likelihood that the operation of the flag will be terminated by a flag lifting agreement under that Part; or

In some respects, financial agreements are easier to set aside than consent orders and in other respects, they are more difficult to generate.

“continues to operate despite the death of a party to the agreement and operates in favour of, and is binding on, the legal personal representative of that party”.

The parties may terminate a financial agreement by:-

If you would like to read the relevant sections of the legislation in regard to Divorce Property Settlement and in particular Binding Financial Agreements please go to the Family Law Act 1975. Please reference Sections 90 & 90U.

Parties are able to enter into a Prenuptial Agreement Australia or financial agreement regarding assets acquired:

Note: Brisbane Prenuptial Agreement Australia and financial agreements can be particularly useful where you have inherited assets from a family estate, or where you have accumulated your own personal wealth from a successful career and making wise investments.

For more information or If you need any help please contact the Brisbane Family Lawyers team today for a FREE, no-obligation 20-minute consultation.

You may also like to know more about the following: